A 36-pack of Trojan condoms now costs $755 in Venezuela. That same box costs about $21 at the Walgreens two blocks from my house. This huge markup is due to the collapse in oil prices and is exacerbated by the fact that there is also a condom shortage in Venezuela because the government is trying to save money by slashing the importation of consumer goods – like contraceptives.

There is no silver lining in this story. Venezuela has one of South American’s highest rates of HIV infection and teenage pregnancy. And abortion is illegal. That means female deaths will increase and females in school and in the work force will decrease. Johnathan Rodriguez, general director at StopHIV says, “Without condoms we can’t do anything.”

So what does any of this have to do with affluenza?

It is a term coined by David Wann and Thomas Naylor in 2001. Despite efforts to bring affluenza to the world’s attention, it continues to spread. It is encouraged by an advertising industry that successfully creates the desire to satisfy artificial needs. Increasing affluenza increases material inequality. And the more unequal a society, the greater the unhappiness and general well-being of its citizens.

The World Health Organization has described poverty as the greatest cause of suffering on earth. But where there is a widening disparity between the rich and the poor (such as 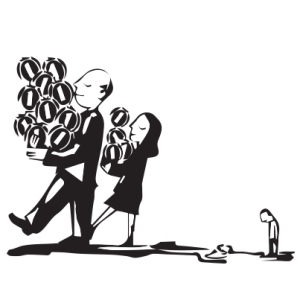 here in the United States) health indicators are getting worse for everyone. Those indicators include life expectancy, crime, addiction, obesity, infant mortality, stroke, academic achievement, happiness and overall prosperity. And this is what most people don’t understand. These life indicators are not only worse among the poor. They are worse at every step of the economic ladder.

Mental disorders are also twice as high in industrialized nations with unequal distribution of wealth. Since May is mental illness awareness month, we should take time to understand why this is so. Affluenza leads to over-consumption, debt, and overwork and these symptoms ultimately take their toll in alienation, stress, anxiety, depression and addiction.

Inequality itself also creates stress. Inequality leads us to define ourselves and each other by referring to what we own. In the process, we end up reclassifying human beings as consumers. The measure of humanity becomes our ability to produce, consume and acquire wealth. As a result, we regularly dehumanize the poor and aggrandize the rich.

And in doing so we not only diminish who we are as people, but we also devalue our relationships with one another. Inequality breads competition. And competitive relationships are not nurturing or supportive. Instead they erode trust and create insecurity.

In addition to making us sick and making our society sick, affluenza is also making our planet sick. Our patterns of consumption are depleting our resources and destabilizing our environmental base. Usually we blame overpopulation for environmental degradation, but the environment is not being damaged in the course of meeting everyone’s needs. The damage is being caused by unequal consumption of resources.

As a nation, we spend over $14 billion a year on cosmetic surgery and it would only cost an additional $13 billion to provide basic health and nutrition to everyone in the world. We spend over $8 billion on cosmetics when another $6 billion would provide universal access to basic education around the world. We spend $11 billion on bottled water ($101B on beer) and would only need an additional $6 Billion to provide clean water and sanitation to everyone on planet earth.

And what about those condoms? We spend almost $14 billion on ice cream when for only $13 billion we could provide reproductive health for all women everywhere. Now I love my ice cream, but I don’t need it. Shouldn’t everyone have the right to protect themselves from STDs and pregnancy? Is this a matter of economics and politics or is it a human rights issue? Is it a problem we should view through the lens of profit and loss columns and our usual stance of pointing fingers of blame at what we cannot control? Or is it the kind of problem we would engage in if we chose to live a Good Life?

What if we choose to live in the GOOD world? Think about that for a minute. What if our investments weren’t in the highest yield stocks but in the highest return on human capacity? What if we invested our time, our wisdom, our abilities and our possessions in human potential and in decisions to care for and preserve the environment? What if we conducted our transactions not as much in goods as in love and compassion, while using the worldly markets of exchange to feed the hungry and uplift those in need.

Every society has a creation myth. The Judeo-Christian tradition tells the story of Adam and Even. It’s a story that can actually give us some good guidance as to our role in this world. It begins with Adam, whose name is a wonderfully playful pun. He is formed from adama, the Hebrew word for dirt. This “dirt being” comes to life when God breathes into him.

And in the story we humans are right away given work to do. We are to till and to keep the garden. The Hebrew words here are “avad” and “shamar.” To “avad” means not just to work but to work “for” someone or something. The land is something we are expected to serve. Think of that for a moment – what would it mean to see ourselves as serving the land, as subordinate to the land? To put the land’s needs ahead of our own desires?

“Shamar” means to watch over, to keep, to preserve. We are to observe the land, to learn from it and about it, and to keep it from harm and violation. The ancient people who wrote this story and other creation myths of the time were primarily agrarian. They knew what it was to live in a land that was fragile and upon which they depended. They understood that all was connected in this web of life and living.

And today despite our technology, our science, our knowledge and our many advances, that hasn’t changed. Try as we might, we just can’t escape it. All of us who eat are dependent on this land and responsible for it.

Our long forgotten task has always been to meet the expectations of the land. The environmentalists have become the prophetic voice of our age as they demand we address the needs of a vulnerable earth as it struggles in the midst of our manipulation and control. A voice that urges us to remember that our survival is woven into the very survival of this earth.

I want to invite you to close your eyes and imagine for a moment. If we hadn’t forgotten our task, what might this land look like? What would it mean if we had taken seriously this instruction about our relationship to the earth? What if we had put the land first? If we had squelched our craving to control and manipulate every aspect of the world around us what would that mean?

Certainly we would not have built artificial barriers and levees to keep the earth’s life from impinging on us. Certainly we would think twice before building homes where landslides are common and forest fires regularly rage. Certainly we would have reconsidered tearing down our dunes and covering the marshlands for the sake of development. Open your eyes and look around and think about how different your surroundings might be.

There are a few examples of this kind of respect for the land left in our world although they are not easy to come by. One occurred during the tsunami of 2004. On islands full of native people where the water should have wiped out existence, no one died. These people still knew how to listen to the land and the sea. So that when they felt the tremor, they climbed to the highest parts of the trees where they safely remained as the water rose and then subsided.

It seems almost incomprehensible to us in our culture. There was nothing those people built or owned that they considered permanent. Like the Native Americans that used to roam this continent, they had a relationship with the earth, not as something to take and own, but as something to respect and care for.

I don’t think we can escape the fact that we have come to value property more than people. In the media today I hear report after report about what it will take to rebuild structures and the cost of restoring property. Estimates for rebuilding the damage in Nepal are over 10 Billion dollars. But there is very little mention of the incalculable cost of rebuilding a life or restoring a sense of security and peace to those who survive.

We seem to have forgotten that the earth is a work in progress, with earthquakes and volcanoes and cyclones and hurricanes — all churning and bringing minerals and vital resources up to the surface. We are the ones who build a habitation on shifting sands. Why do we label natural creative events as “disasters”? Because we have not yet learned to respect the on-going creative processes of the earth.

Affluenza is an epidemic, but it is not a life sentence. If you are suffering from: workaholism; an addiction to chaos; low self-esteem; depression; an inability to delay gratification and/or a false sense of entitlement, there is help. If you are observing the effects of climate change, loss of biodiversity, the polarization of economic classes and the loss of economic balance, there is still hope.

Affluenza can be successfully treated. The most important step is the first one — to become aware of the problem and to own our piece of it. With awareness, we can create more balanced expectations and use our money and our resources in more appropriate ways. We can consciously define ourselves as having value regardless of our income, possessions or wealth. And we can place family, friends and contentment over money when setting our goals.

Then we can take on the even bigger task of changing our own patterns of behavior and consumption. Our challenge is to no longer overconsume. To ask ourselves before every purchase: Do I need it? Do I want to dust (dry-clean or otherwise maintain) it? Could I borrow it from a friend, neighbor or family member? Is there anything I already own that I could substitute for it? When we no longer over consume, we leave more resources for others, and we have more resources of our own to share.

While researching for this week’s message, I discovered the Center for Biological Diversity’s Endangered Species Condoms project. The Center uses condoms to highlight the connection between sex, population, over consumption and damage to the environment. Their condoms come in boxes that highlight threatened wildlife with slogans like, “Wrap with care, save the polar bear” and “Cover your tweedle, save the burying beetle.”

So the next thing I did was simply connect the dots. I contacted the Center about the condom shortage in Venezuela and I tracked down a doctor who lives there and is the past president of the World Sexology Association. And I’m thrilled to tell you that the Center is donating 12,000 condoms with imprints like In the sack? Save the Leatherback! And now I would like to invite you to be part of this cause or to contribute to whatever cause is on

your heart these days. I want to appeal to each one of you to skip the Dairy Treat this week and donate the money you would have spent on ice cream to helping someone else. And when the sun is shining and you feel the temptation you can remember the condom that says Before it gets hotter, think of the sea otter.

One person can make a difference. Together we can change the world.